Click here to read our extensive Subsea Equipment List PDF, which contains definitions to the words highlighted in bold within this article along with many others.

First let’s explain a couple of basics. Oil and gas production, on land, at sea and subsea is controlled through a group of stacked valves mounted on the well head. The larger valves were traditionally on the bottom of this stack with gradually smaller ones mounted above. These stacks of valves ended up roughly triangular in silhouette and often had handles and gauge sticking out forming what looked like a Christmas tree and the name stuck.

To this day, all such production and injection valve stacks are referred to as ‘Christmas trees’, ‘Xmas trees’, ‘X-trees’ and just ‘trees’ for short, even though no subsea tree looks at all like a Christmas tree. Simple land well Xmas tree valves are opened manually by hand wheels, more complex systems see the opening and closing done by pneumatic or hydraulic line to each valve actuator. For the purpose of this piece, we will assume that all subsea Xmas tree valves are hydraulically operated.

The Well – Although referred to as ‘the well’ it is far more complex than a hole in the ground and can contain complex well bore isolation devices, electric or hydraulic pumps, instrumentation and always the last line of defence for undesired hydrocarbon release, the Surface Controlled Subsurface Safety Valve (SCSSV or triple SV). From a subsea production control perspective, it is relatively simple in that it usually controls only the SCSSV and monitors a few pressure and temperature instruments.

The Xmas Tree – This contains all the production/injection isolation valves, flow control valves, chemical injection facilities and a whole gamut of health and status instrumentation.

The Transportation System – This is basically the pipework from the wells back to the production platform. It can contain instruments and valves which are monitored and controlled by the Production Control System (PCS).

At the beginning of the modern era of subsea production – usually considered to be the early to mid 1980’s – the key element of this new technology was seen to be the control system. These started out as simple systems with direct hydraulic lines connecting to each and every subsea valve. Over a relatively short period these changed to sequenced systems where one hydraulic line could function more than one valve and then on to what is now the most common designs which use hydraulic supply lines feeding a Subsea Control Module (SCM) which is controlled electrically from the surface and can open and close all the subsea valves associated with a single well. These systems are referred to Electro-Hydraulic Multiplexed (EHMUX) control systems. There is now a growing push to eliminate the hydraulic portion all together and replace hydraulic valve actuators with electric motors in what is referred to as All-Electric controls.

Over time subsea systems have become ever more complex with the addition of an increasing number of add-ons in the well itself, on the Xmas trees and in the production pipeline system. There is also a growing use of what is sometimes called Subsea Factory, where a lot of the complex processing such as fluid and gas separation, fluid pumping, gas compression et cetera, usually done on the surface platform being done on the seabed.

The Subsea Production Control System (SPCS) which looks after all the above instrument monitoring and control is vital to subsea oil and gas production. The control system is split between a number of platform housed modules (Electrical Power Unit (EPU), Hydraulic Power Unit (HPU) and Master Control Station (MCS) and subsea modules connected together with an Umbilical. The umbilical is just a bunch of hydraulic hoses/tubes, electrical cables and sometimes fibre optic cables. The subsea portion of the controls system relies heavily on a unit called a Subsea Control Module (SCM) which is usually mounted on the Xmas tree structure. This is the heart and brain of the system.

Each SCM contains a hydraulic and electronic portion. The electronic one is known as the Subsea Electronic Module (SEM). This is basically an industrial computer housed in a single atmosphere nitrogen filled chamber which receives power from the platform and likewise communicates back and forth with the platform Master Control Station. Command are sent down to request Xmas tree, manifold and down hole valve movements and valve position information along with all the other process instrumentation is returned. The Hydraulic portion contains fluid accumulators to store hydraulic energy, fluid filters, manifolds and Directional Control Valves (DCV) which direct pressurised fluid from the SCM out through tubes and pipes to the large production and injection valves on the Xmas tree, manifolds and down hole.

The conduit for these signals, the hydraulic fluid and well injection chemicals is the umbilical, comprised of hoses or tubes and cables and fitted with special connectors at each end. The need for underwater mating of connectors drove early designers down the sealed inductive connector path but these proved unreliable over time resulting in the development of conductive pin connector as used in nearly 100% of current systems. Another more recent change was driven by the ever-increasing amount of data being transmitted to and from the platform. This led to a move away from Copper Cables to Fibre Optic Cables. On the hydraulic front, early subsea systems were for relatively shallow water so Thermoplastic hoses were used but as water depths increased, these hoses began to collapse due to the increased hydrostatic pressure. The solution was to move to Steel Tube Umbilicals which also had the benefit of being more suited to harsh chemical service used in downhole injection. One of the drivers for a move to all-electric systems is to simplify the umbilical.

The final piece of the subsea puzzle is Transportation of produced fluids and gasses i.e., the pipeline from the subsea field back to the platform. Subsea control systems also control off-tree valves such as manifold pipeline isolations and manifold instrumentation.  Another type of safety system, High Integrity Pipeline Protection Systems (HIPPS), were introduced towards the subsea end of a pipeline to protect pipelines in the event of pressure surges beyond their design limit. Nearer the platform end of the pipeline is a Subsea Isolation Valve (SSIV). These first came to play in the aftermath of the Piper Alpha offshore accident in 1988. The post-accident enquiry recommended the installation of a fail-safe means of isolating the incoming pipeline to protect the production facilities by preventing the unrestricted flow of natural gas in the event of an offshore incident. 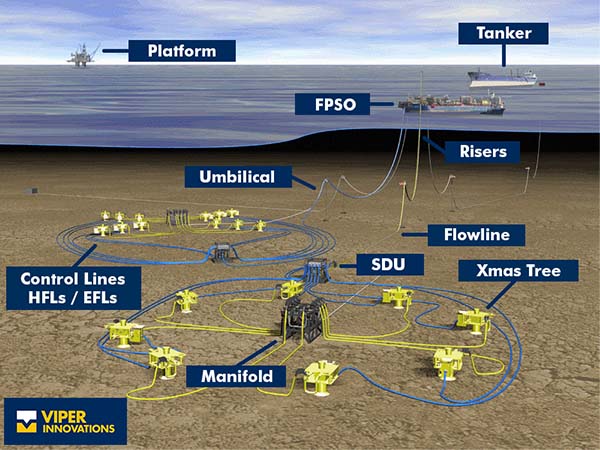